Several hundred years ago, humans were nearly exterminated by titans. Titans are typically several stories tall, seem to have no intelligence, devour human beings and, worst of all, seem to do it for the pleasure rather than as a food source. A small percentage of humanity survived by walling themselves in a city protected by extremely high walls, even taller than the biggest of titans.

Flash forward to the present and the city has not seen a titan in over 100 years. Teenage boy Eren and his foster sister Mikasa witness something horrific as the city walls are destroyed by a colossal titan that appears out of thin air. As the smaller titans flood the city, the two kids watch in horror as their mother is eaten alive. Eren vows that he will murder every single titan and take revenge for all of mankind. (Source: MangaHelpers)

What the hell, seriously, what, the, hell, is going on with this anime ?!

First off all, the story. The story was what I personally liked most of this anime. I didn’t read the Manga, which I probably will when I really want to see what happens next and don’t feel like waiting a week. It starts off with Eren, the main protagonist, crying after a long dream. It still wasn’t clarified why he cried and what happened in the dream he had, but I assume, this will be explained soon. Shortly after that, the titans attack, which was predictable, but I never expected it being like that, seriously. While episode 3 and 4 were more calm, episode 5 was one of the most amazing anime experiences I ever had. Those who watched the series until episode 5 surely know what I’m going to say, if what happened with that certain character is really true, it’d actually be an outstanding plot-twist, however I’d be a little bit sad, especially now that I started to like that character. Episode 6 is about the past of the main protagonists, which is pretty cool. So far everything was perfect in the story, and it was really impressive as well. I definitely look forward to the rest of the story, and I’m certain that it’s going to be even more awesome.

Current opening Theme is Guren no Yumiya by Linked Horizon but Official single release will be in coming July 10th, 2013. And ending is Utsukushiki Zankoku na Sekai by Yoko Hikasa.

The soundtrack was really amazing, too. The voice actors were nicely chosen, and the background sounds are really natural and give especially in the action scenes a nice feeling. Speaking of action scenes, the soundtrack that plays in the background is just amazing. It gives such an epic feeling while watching this anime, it’s just amazing. I don’t recall any calm music, and I also don’t recall any remarkably beautiful track, but I like the soundtrack a lot so far. There are definitely better soundtracks around, that’s for sure, but the soundtrack of Shingeki no Kyojin is definitely one of the better ones. I recall the ending to be quite decent, but the opening was awesome, and it’s one of my favorites for sure.

If you are fans of Shingeki no Kyojin, beware of SPOILERS!!! If you haven’t watched Episode 8 , it’s better dun continue reading

Okay, enough review and overview about Singeki no Kyojin. Let’s continue about interesting things. First of all, I want to start with Cosplay stuffs. Since after episode one was aired, most cosplayers started cosplaying Singeki no Kyojin. The most important and hardest thing about cosplaying SnK is their 3D maneuver gear, is a set of gear developed by humans that allows great mobility when facing the Titans. The gear itself takes the form of a body harness that encompasses much of the body below the neck. Though using it will allow a skilled user great mobility, it carries a large risk of overtaxing the user’s muscles, thus special physical conditioning is required to use this gear. Some tools involved in the apparatus include:

Take a loot at image below. 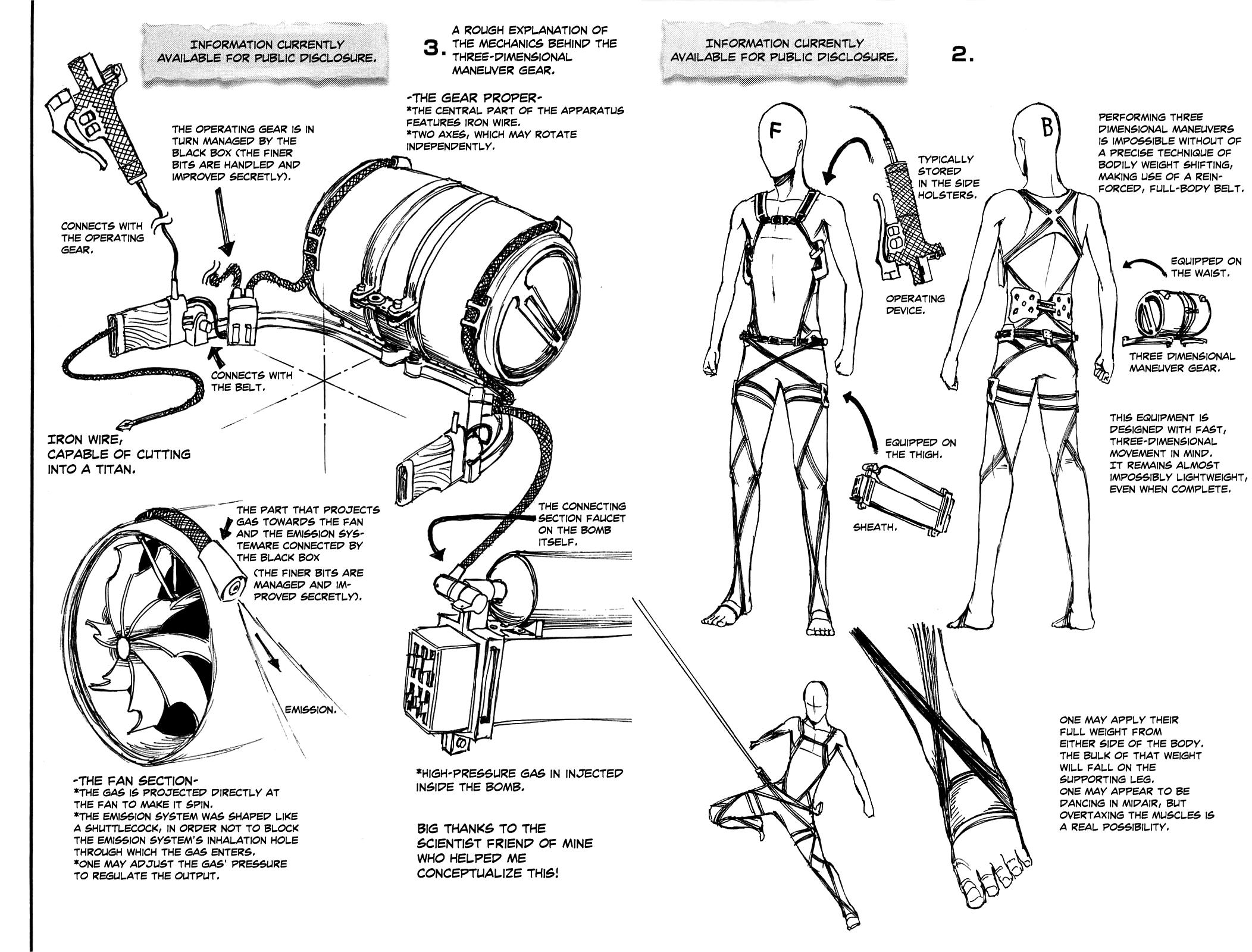 It’s not really special about costumes, and also good thing about SnK cosplayers is since most popular characters in series wear the same uniform and 3D gear. So, once you’ve once, you only need to fix hairstyle/wig and makeup. Once you’re Eren, you can also Mikasa, or Sasha, Jean, Rivai,.. anyone you like lol.

*This will be a little secret corner :3 Let me show you guys my currently favorite Mikasa Ackerman Cosplay. Taadaaa!!!!

King x Mon Cosplayer have also tons of SnK cosplay photos. Their Eren, Mikasa, looks good also. But among them, my favorite is as Annie Leonhardt.

Let me continue with popular stuffs. It might costs too much to cosplay as soldiers but dun forget about that you can try Titans also. Get ready to shocked!!!! xDD

That Eren’s Titan form makeup is too awesome. Nose, teeth, eyes, and even hairstyle… Kill me already (^w^)/ (Credit to original cosplayer)

Here is another Titan Makeup by Akemi, comes with Tutorials lol

Read more about Makeup details HERE!!! Or, want to try some funny and stunning photo shoots? Become a Titan or Fight for your live!! LOL

Oops.. the post is really long now. Hope you guys dun get bored while reading LOL.

Finally, SCANDAL comes back with their 15th single entitled “Awanai Tsumori no,…